Pain Management for a Herniated Disc 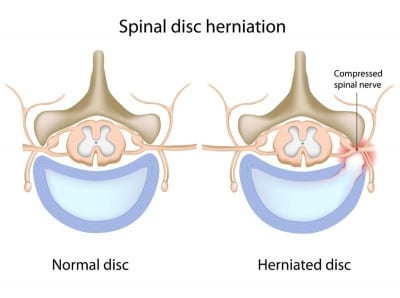 Vertebral discs are soft tissue that act as a shock absorbing system between the vertebrae that make up the spine (also called intervertebral discs). The discs are composed of an outer layer of tough cartilage (annulus) that surrounds softer, jelly-like cartilage (nucleus). A herniated disc is a vertebral disc that has torn open, allowing the soft interior material to protrude.

Sometimes medical professionals will refer to a herniated disc as a slipped disc, ruptured disc, disc protrusion, prolapsed disc, or pinched nerve. These terms have technical variations in their meaning, so ask your doctor to explain your exact condition when using one of these terms.

Any disc in the spine can become herniated, but herniated discs more frequently occur in the lumbar (lower) and the cervical (neck) regions of the spine. Lumbar disc herniations are the most common cause of lumbago and leg pain (sciatica).

A herniated disc usually occurs when a person is in their thirties or forties, and the soft liquid interior of the discs (nucleus pulposus) is still a gelatin-like substance. As a person ages, the liquid changes and the risk of herniation is less likely. After age 50, the most likely cause of low back and leg pain is osteoarthritic degeneration (spondylosis) or spinal stenosis. Generally, men have a slightly higher risk of a herniated disc than females.

What Is a Herniated Disc?

As the vertebral discs degenerate from age or injury, the softer central, jelly-like cartilage (nucleus) can protrude through the surrounding outer ring (annulus). This abnormal rupture of the central portion of the disc and resulting protrusion is referred to as a disc herniation or herniated disc.

The most common location for a herniated disc is in the vertebrae of the lower back (lumbar). This area of the spine must continually absorb the impact of the weight of the upper body. The lower back is also critically involved in our body’s movements throughout the day, as we twist the torso in rotating side to side and in flexing when bending or lifting.

If the protruding portion of a herniated disc is large enough, the disc tissue can press against adjacent spinal nerves causing pain. The tear in the disc’s outer ring may also allow a release of the jelly-like interior causing inflammation, which can trigger pain even if it does not place pressure on a nerve.

What Causes a Herniated Disc?

Disc herniation is most often the result of age-related wear and tear. Trauma can also cause disc herniations.

Some of the factors that increase the risk of a disc herniation include:

What are the Symptoms of a Herniated Disc?

The nerve damage from a herniated disc can sometimes result in the loss of bowel and bladder control, and sexual dysfunction. However, it is possible to have a herniated disc without any pain or noticeable symptoms, depending on its location.

The two main causes of pain from a herniated disc are a pinched nerve and disc pain.

How is a Herniated Disc Diagnosed?

A physical exam and medical history are required to diagnose a herniated disc. However, to confirm or rule out other causes of the symptoms, such as spondylolisthesis, degeneration, tumors, or metastases (cancer), one or more of the following tests can be used to help in the diagnosis and to determine the best treatment options.

How is a Herniated Disc Treated?

There are a variety of non-surgical treatments that may help relieve the pain from a herniated disc. However, no single treatment option works for everyone, so it’s best to consult a doctor.

It is important that patients avoid too much bed rest, which can lead to stiff joints, weak muscles, and complicate the recovery. If possible, rest in a comfortable position for no more than 30 minutes, and then go for a short walk. Also, doing light work is good therapy, but the patient should avoid any activities that worsen the pain.

Surgery may be useful if non-surgical treatments have not provided adequate pain relief from a herniated disc. The following back surgeries are options:

Is it Possible to Prevent a Herniated Disc?

Though a herniated disc can result from normal wear and tear, it’s important to maintain a healthy spine while avoiding spinal injuries.

Novus Spine & Pain Center is in Lakeland, Florida, and specializes in treating herniated disc pain. By using a comprehensive approach and cutting-edge therapies, we work together with patients to restore function and regain an active lifestyle, while minimizing the need for opiates.