Pain Treatments for Low Back Pain 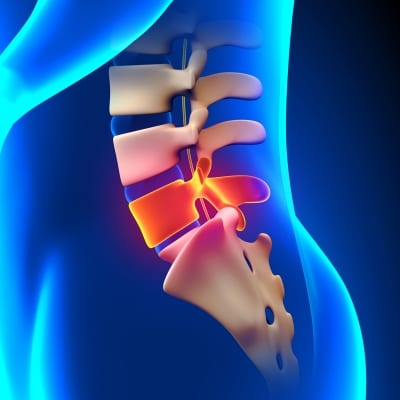 Lumbar discectomy, microdiscectomy, and percutaneous discectomy are three similar minimally invasive procedures for a herniated disc to relieve low back pain. The procedures are most effective for treating pain that radiates into the arms or legs.

Discs are round cushions that sit between the bones of the spine (vertebrae). They act like shock absorbers and allow the body to bend and move without the vertebrae rubbing together.

When one of the discs ruptures (herniates) and pushes out from between the bones, it can press on nearby nerves causing pain, numbness, and weakness in the back, legs, and arms.

The most often used pain management treatment for a herniated disc is rest, pain relievers, and physical therapy. But if the symptoms don’t improve after a few months of non-surgical treatment, a minimally invasive procedure may be an option. Fortunately, most people suffering from back or neck pain don’t need surgery.

Minimally invasive procedures for a herniated disc can be a good option for patients who are otherwise healthy but:

Minimally Invasive Procedures for Back Pain from a Herniated Disc

There are different minimally invasive procedures that can help relieve the pressure on nerves that cause pain. A “discectomy” is a procedure to remove a damaged disc or the protrusion of a herniated disc that is pressing on a nerve and causing pain. By relieving the pressure on the nerve, the pain is relieved.

A lumbar discectomy, microdiscectomy, and percutaneous discectomy are minimally invasive procedures that can help relieve the radiating pain caused by a herniated disc.

A lumbar discectomy is a common outpatient procedure performed on the lower (lumbar) spine. It has a high success rate, especially in relieving leg pain (sciatica).

Historically, open surgery (a large incision) was used to treat sciatica. The procedure may also remove a part of the intervertebral disc (decompression) to relieve pressure on adjacent nerve roots. Today, however, disc decompression techniques have advanced, and the procedure is performed through small incisions, and endoscopes (small tubes), using a microscope or x-ray technology to view the disc.

A microdiscectomy (also called a microdecompression) is done through a very small incision in the skin. A thin tube with a camera on one end is inserted to view and remove the damaged disc. The procedure minimizes the potential for tissue damage by using an incision about an inch long. During the minimally invasive procedure, the muscles and ligaments are separated rather than being cut to access the disc, reducing post-operative pain.

A microdiscectomy is usually more effective for relieving leg pain (also known as radiculopathy, or sciatica) than lower back pain.

As general rule, microdiscectomy is considered a reliable minimally invasive procedure for immediate, or nearly immediate, relief of sciatica from a lumbar herniated disc.

The goal of a microdiscectomy is to remove the disc material placing pressure on the nerves, and includes:

After the procedure, the spinal nerve has the space it needs inside the spinal column, so pain previously caused by pinching of the nerve should stop.

A percutaneous (through the skin) discectomy (also called endoscopic discectomy) is similar to microdiscectomy.

With a percutaneous discectomy, an endoscopic (small tube) is inserted through a very small incision in the skin, between the vertebrae and into the middle of the disc. Guidance is aided by x-ray. The endoscope has a camera that allows the doctor to see inside the body, and surgical tools are inserted through the tube, or a series of tubes.

There are several types of percutaneous discectomy procedures, most done with using local or general anesthesia. All of them use small instruments inserted between the vertebrae and into the middle of the disc. X-rays help guide the movement of the instruments during surgery. The surgeon can remove disc tissue by either:

Once the portion of the disc pressing on the nerve is removed, the patient will have less pain than was present before the procedure.

Patients who may benefit most from this procedure are ones with pain arising from a contained herniated disc (a bulging disc where there is no rupture of the outer wall).

For some patients, a percutaneous discectomy can help relieve back and leg pain symptoms, including sciatica and radiculopathy. A percutaneous discectomy is considered acceptable treatment for patients with small, contained herniations. It may also be an option for patients with large, contained (non-ruptured disc) herniations for whom open surgery would not be an appropriate treatment.

When is a Microdiscectomy Used to Treat Back Pain?

A microdiscectomy may be necessary if a herniated disc in the lower back is causing weakness, pain, or tingling in the back and in a leg. Typically, a microdiscectomy is performed for two reasons:

A microdiscectomy for back pain resulting from a herniated disc can provide many people relief from pain and other symptoms. However, it doesn’t work for everyone. There is a small chance the procedure will not reduce the amount of pain, or there may be temporary relief and then the pain returns. In about 5% of cases, the disc will herniate again.

A discectomy is not a permanent cure because it does nothing to stop or reverse the reason that caused the disc to become herniated. To avoid re-injuring the spine, doctors recommend:

Novus Spine & Pain Center is in Lakeland, Florida, and treats patients with chronic pain with numerous therapies, including minimally invasive procedures for back pain. By using a comprehensive approach and cutting edge therapies, we work together with patients to restore function and regain an active lifestyle, while minimizing the need for opiates.