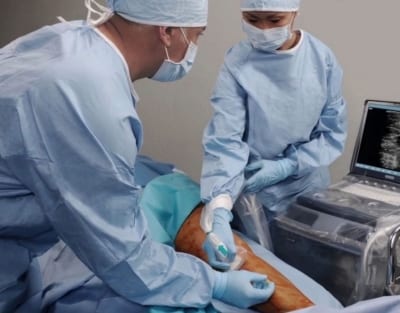 Endovenous ablation (also called Endovenous Thermal Ablation) is a frequently used method for treating varicose veins, which affect approximately a quarter of the adult U.S. population. Varicose veins are superficial blood vessels that bulge and rise above the skin’s surface. These vessels are abnormally lengthened, twisted, or dilated and appear most often on the legs and thighs.

Varicose veins can be uncomfortable and result in swelling of the legs. If left untreated, they may lead to more serious medical problems. In addition, patients with varicose veins can develop venous ulcers, which are the result of venous insufficiency. The Novus Spine & Pain Center vein clinic uses endovenous ablation to alleviate the chronic pain, swelling, irritation, discoloration, and inflammation of varicose veins.

Endovenous ablation is safe, less invasive than conventional surgery, and leaves virtually no scars. The procedure has radically changed the treatment of varicose veins.

There are four methods for treating varicose veins:

What Is Endovenous Ablation?

Endovenous ablation is an image-guided, minimally invasive procedure using laser energy, radiofrequency, or steam to cauterize (burn) and close varicose veins. The procedure damages the vein causing it to collapse, shrink, and eventually dissolve and disappear. Blood then flows through other nearby veins.

The loss of a vein from the procedure does not create new problems because:

Additionally, endovenous ablation leaves the problem veins in place, so there is minimal bleeding and bruising. The treatment results in less pain than surgical ligation and stripping while providing similar cosmetic results. In addition, the patient may resume normal activities sooner.

Varicose veins are not always a serious health problem, but they can be painful. They can also be unsightly. Although endovenous ablation can be used for cosmetic purposes, it is more commonly used to help alleviate chronic pain and other symptoms related to varicose veins in the legs. The symptoms can include:

How Does Endovenous Ablation Work?

Endovenous ablation is an image-guided, minimally invasive procedure performed on an outpatient basis.

To begin, a topical anesthetic cream is applied over the abnormal vein area to reduce any discomfort. The patient also receives a sedative and regional anesthesia. Depending on the number of varicose veins treated, the patient may receive general anesthesia.

Using ultrasound equipment for guidance, the doctor inserts a catheter through the skin and positions it within the abnormal vein. The laser fiber or radiofrequency electrode is inserted through the catheter, so the tip of the fiber or electrode is exposed. Laser or radiofrequency energy is then applied as the catheter is slowly withdrawn from the vein. The procedure is usually completed in about an hour, and no sutures are needed.

Following the procedure, the patient will need to wear a compression stocking to help reduce bruising, tenderness, and minimize the possibility of blood clots forming. The patient may resume normal activities immediately, with the exception of air travel or prolonged sitting (such as a long car trip). Doctors want patients to remain active. Spending too much time in bed during the recovery period increases the chances of complications.

There are three types of endovenous ablation treatment for varicose veins. Treatment can be accomplished with a laser, radiofrequency, or steam to cauterize and close varicose veins.

Endovenous laser ablation can be performed in an outpatient setting. Access to the varicose vein is obtained with a very small needle using ultrasound for guidance. Once in the vein, a guidewire is passed through the needle into the vein. After checking the position of the guidewire, a tiny laser fiber is positioned and activated within the vein. As the laser is slowly withdrawn, it cauterizes (burns) and closes the varicose vein.

An advantage of endovenous laser ablation is that the amount of delivered energy inside the vein is variable. By adjusting the pullback speed, the power, or both, the doctor can control the total amount of energy delivered to the vein.

Several systems for radiofrequency ablation exist. Similar to laser ablation, radiofrequency uses small electrodes at the end of a catheter with direct contact with the vein wall. The electrode emits high radiofrequency energy that heats the vein tissue. As the catheter is withdrawn, the heat cauterizes and closes the vein.

The advantage that radiofrequency ablation (RFA) has over endovenous laser ablation (EVLA) includes:

Endovenous steam ablation is the newest method of thermal vein ablation. The procedure works by heating the vein with steam. Similar to laser and radiofrequency ablation, steam ablation can be performed with the patient under local anesthesia in an outpatient setting.

Only a very small volume of sterile water is used with the steam catheter. The only published case study on steam ablation shows favorable patient-reported outcomes. The study also found the procedure was well tolerated, pain scores were low, and patients were very satisfied with the treatment.

The main limitation of steam ablation is the lack of evidence; only three reports on steam ablation have been published to date. Larger comparative studies are needed to compare the long-term efficacy and the risk-benefit ratio of steam ablation with existing endovenous ablation techniques.

Who Can Benefit from Endovenous Ablation?

The benefits of endovenous ablation include:

As with many medical procedures, the patient will feel somewhat tired for a few weeks. Any numbness or tingling associated with the procedure typically resolve over a couple of weeks.

There are many reasons for patients to consider treating varicose veins with endovenous ablation:

Varicose veins are the result of a progressive disease. While it is possible to treat problematic veins, it is impossible to predict if others will appear later. Every patient is different; individual genetics and lifestyle will dictate whether other varicose veins will develop over time.

Novus Spine & Pain Center is in Lakeland, Florida, and treats patients with chronic pain with numerous therapies, including endovenous ablation. By using a comprehensive approach and cutting-edge therapies, we work together with patients to restore function and regain an active lifestyle, while minimizing the need for opiates.