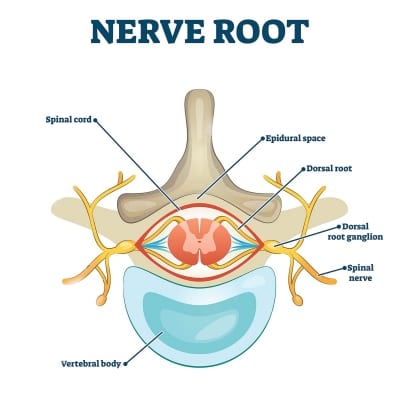 Dorsal root ganglion (DRG) stimulation is a pain management option for people with difficult-to-treat chronic pain in specific areas of the lower body, such as the foot, knee, hip, or groin. It is similar to spinal cord stimulation (SCS), which can block pain signals from a large area of the body; however, DRG targets more specific areas of the body.

What is a Dorsal Root Ganglion?

The dorsal root ganglion (DRG) is a part of the spine where nerves branch off from the dorsal column (the back of the spinal cord). These branches of nerves then spread throughout the body. The DRG relays both pain and non-pain signals from the body to the central nervous system.

What Is Dorsal Root Ganglion Stimulation?

A small pulse generator is implanted in the upper buttock/low back or, with an extension, into the abdominal wall. Patients have a small handheld controller that can change the stimulation settings.

This kind of stimulation is better for smaller, more specific areas of pain because it can target a more specific location than traditional SCS. It is particularly effective in relieving chronic lower limb pain associated with complex regional pain syndrome (CRPS) and peripheral causalgia (nerve damage).

The DRG stimulation consists of three parts that work together to help manage pain:

Implanting the DRG stimulator is similar to having an SCS device implanted. The process begins with a trial that typically lasts 5 to 7 days. The trial stimulator leads are temporarily implanted through the skin into the epidural space (the area surrounding the spinal cord). Once in place, the leads are connected to a trial stimulator worn outside the body on a belt.

When activated, the leads send tiny electrical impulses to the dorsal root ganglion. The impulse blocks pain signals to the brain. During the trial, the patient can control the device to alleviate pain. The patient can turn the device on and off as needed and adjust the amount of stimulation.

After the trial, the patient and physician determine if a permanent device would be helpful. For permanent implantation, the DRG stimulator’s electrical pulses are programmed with an external control remote unit that the patient uses to control the system.

There are four distinct advantages of targeting the dorsal root ganglion for pain relief:

In one survey of over 200 patients with a permanent DRG stimulator implant, the patients reported substantial pain improvement. The survey found DRG stimulation to be an effective and safe therapy for chronic pain.

Who Can Benefit from DRG Stimulation?

Traditional spinal cord stimulation has been utilized since 1967, and although the technology has evolved, it is not a remedy for all chronic pain patients. Studies show that about half of the patients report satisfactory relief with their SCS implant.

The FDA has approved DRG stimulation for lower extremity CRPS, which could include neuropathic pain conditions and chronic pain following foot, knee, groin, and other surgeries. Doctors believe one of the best future indications for DRG stimulation is diabetic neuropathy. Over time, high blood sugar levels tend to damage the peripheral nerves in the legs and feet. Neuropathic pain is often managed with medication, which can cause side effects. DRG stimulation can target both feet and help relieve the diabetic neuropathy pain without medication and any associated side effects.

DRG stimulation therapy may be an option for patients with chronic pain that has lasted six months or more and have found little or no relief from traditional neurostimulation, surgery, pain medications, nerve blocks, or other pain management therapies. If you suffer from this kind of pain, DRG stimulation may work where other therapies have not been effective.

Novus Spine & Pain Center is in Lakeland, Florida, and treats patients with chronic pain with numerous therapies, including dorsal root ganglion stimulation. By using a comprehensive approach and cutting edge therapies, we work together with patients to restore function and regain an active lifestyle, while minimizing the need for opiates.