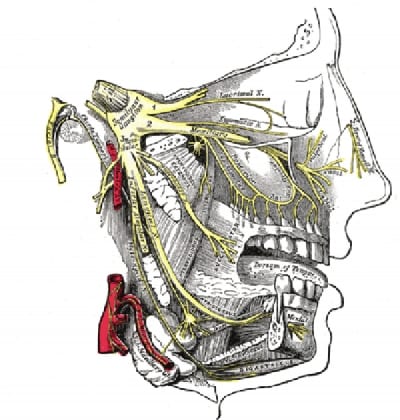 Trigeminal neuralgia (TN or TGN) is a chronic pain disorder that affects the trigeminal nerve, one of the 12 pairs of cranial nerves in the head.

The trigeminal nerve is composed of three large branches – ophthalmic nerve (V1), maxillary nerve (V2), and mandibular nerve (V3). These nerves provide sensory innervation to the face and motor innervation to the muscles that are used for chewing and swallowing.

What Is Trigeminal Neuralgia?

People suffering from trigeminal neuralgia feel pain from any mild stimulation on the face. Simple actions like teeth brushing, face washing, or putting on makeup can trigger a jolt of excruciating pain. Even the wind blowing on the face can be painful. Patients describe the feeling as a stabbing, electric shock-like pain. The intensity of pain can be physically and mentally incapacitating; making trigeminal neuralgia one of the most painful afflictions known in medicine.

The typical or “classic” form of the disorder (Type 1 or TN1) causes extreme, sporadic, and sudden burning or shock-like facial pain that lasts anywhere from a few seconds to a couple of minutes per episode. The attacks can occur in quick succession, or in volleys lasting a couple of hours.

The “atypical” form of the disorder (Type 2 or TN2), is characterized by constant aching, burning, and stabbing pain of somewhat lower intensity than Type 1. A patient may have both forms of pain that can sometimes occur simultaneously.

The pain of trigeminal neuralgia is intense. The pain may be an isolated episode, or it may occur every few hours, minutes, or even every few seconds. The attacks can be separated by months or even years. In some patients, the attacks can become chronic, affecting daily activities and resulting in depression. Trigeminal neuralgia may begin with initially short, mild attacks; however, the pain can progress and cause longer, more frequent bouts of searing pain.

It is estimated that 150,000 people are diagnosed with trigeminal neuralgia every year. While the disorder can occur at any age, it is most common in those over the age of 50, and is more common in women than men. There is some evidence the disorder may be hereditary. Hypertension and multiple sclerosis are also risk factors.

What are the Symptoms of Trigeminal Neuralgia?

The typical symptoms of trigeminal neuralgia include an acute onset of a sharp, stabbing pain to one side of the face. Most patients report that their pain begins spontaneously and seemingly out of nowhere. The pain is severe and often described as an electric shock that can be made worse by a light touch. Also, the bouts of pain rarely occur at night, when the patient is asleep, differentiating trigeminal neuralgia from migraines, which often awakens a sleeping person.

While there may be a single attack of pain, the patient can experience recurrent sharp pain every few hours or every few seconds after the initial attack. Between the attacks, the pain resolves completely and there can be no symptoms. After the first episode of attacks, the pain may subside for months or years, but there is a chance trigeminal neuralgia will recur without warning. Trigeminal neuralgia is usually progressive, with the pain attacks worsening over time, and the pain-free period between attacks becoming fewer in number and shorter in duration.

The pain associated with trigeminal neuralgia often begins in the jaw, which makes some patients assume they have a dental problem. As a result, some patients have a root canal that does not provide relief, and they realize the problem is not a dental condition.

Trigeminal neuralgia symptoms may include one or more of these patterns:

Trigeminal neuralgia is not fatal, but can be debilitating. The pain often leaves patients with uncontrollable facial twitching, which is why the disorder is also known as “tic douloureux,” because the intense pain can cause patients to contort their face into a grimace. Fearing the severe pain might return, some trigeminal neuralgia patients may become distraught and suffer from anxiety because of the uncertainty of the pain. Therefore, some patients may avoid daily activities or social contacts, because they fear an impending attack.

How is Trigeminal Neuralgia Diagnosed?

A trigeminal neuralgia diagnosis is primarily based on the patient’s history and description of the symptoms, along with results from physical and neurological examinations. Because several conditions can cause facial pain and a number of the symptoms are overlapping, obtaining a correct diagnosis can be difficult. The patient’s description of the pain type, location, and what triggers the pain are crucial in the diagnoses of trigeminal neuralgia.

Some of the tests to diagnose trigeminal neuralgia and determine underlying causes include:

Testing is not necessary, often times, to diagnose trigeminal neuralgia after a health care professional discusses a patient’s history and performs a physical examination. Affected individuals tend to shield their face in an effort to protect it from touching. This action is an important diagnostic sign; because, with many other pain syndromes like a toothache, the patient tends to rub or hold the face to help ease the pain

How is Trigeminal Neuralgia Treated?

Treatment for trigeminal neuralgia usually starts with medications. For some patients, the medication is sufficient and no additional treatment is needed. However, over time, some patients may stop responding to medications or may experience unpleasant side effects. For these patients, injections or surgery are possible treatment options.

Surgery to treat trigeminal neuralgia may, or may not, be effective. Pain-free periods following surgery vary, and there are cases in which surgery makes the pain worse.

If the condition is due to another cause, such as multiple sclerosis, the underlying condition is the primary focus of treatment.

Drugs for treating trigeminal neuralgia that lessen or block pain signals sent to the brain:

Although not well-studied, some patients can manage trigeminal neuralgia using complementary techniques in combination with drug treatment. These therapies offer varying degrees of success.

Over time, it is common that medication and alternative treatments for trigeminal neuralgia become less and less effective. There are several surgical options to consider. The success of the surgery, however, depends on the nature of the pain, the patient’s preference, physical health, and previous surgeries. The presence of multiple sclerosis and the distribution of trigeminal nerve involvement (particularly when the upper/ophthalmic branch is involved) are all factors that should be taken into consideration.

Some surgical procedures are done on an outpatient basis, while others are more complex and require general anesthesia. Following surgery, the patient can expect some degree of facial numbness. Unfortunately, trigeminal neuralgia may return even if the operation is initially successful.

Coping and Support for Trigeminal Neuralgia

Living with trigeminal neuralgia can be difficult. Chronic pain from trigeminal neuralgia is frequently very isolating and depressing for patients. The pain often causes depression and sleep disturbance, making the patient more vulnerable to the pain and suffering. The disorder may affect interaction with friends and family, work productivity, and the overall quality of life.

Novus Spine & Pain Center is in Lakeland, Florida, and specializes in treating the pain of Trigeminal Neuralgia. By using a comprehensive approach and cutting edge therapies, we work together with patients to restore function and regain an active lifestyle, while minimizing the need for opiates.