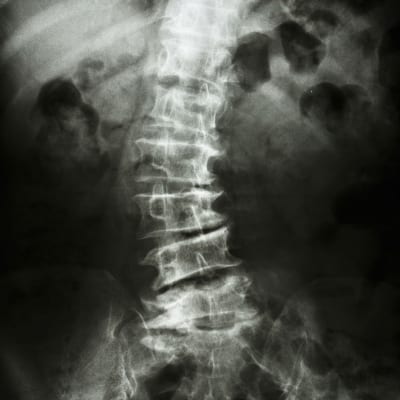 Scoliosis (pronounced sko-lee-oh-sis) is a three-dimensional abnormality that occurs when the spine becomes rotated and curved sideways. The condition affects between 2% and 3% of Americans, which is about six to nine million people. At Novus Spine & Pain Center, we actively treat the pain of scoliosis.

Though all forms of scoliosis involve some degree of spinal curvature, some are more severe than others. The various types of scoliosis are classified by the age of onset, as well as the speed and mechanism of progression.

In most people, the spine runs straight down the middle of their back. However, a person with scoliosis has a sideways curvature of the spine. As a result, they may lean a little, or their shoulders or hips may look uneven.

The angle of the curve may vary, but anything that measures greater than 10 degrees is considered scoliosis. Doctors may use the letters “C” and “S” to describe the curve of the backbone.

Some key points to know about scoliosis are:

Everyone’s spine has subtle natural curves. The spine curves from front to back to naturally position the head over the pelvis and act as a shock absorber to distribute the stress of the body’s movements. When viewed from behind, the spine is a straight line down the middle of the back.

Scoliosis can result in someone leaning to one side and making their shoulders or waist appear uneven. Large curves can make the ribs rub against the pelvis, causing pain. Very large curves can damage the joints and cause arthritis of the spine. In extreme cases, scoliosis can cause lung problems.

Scoliosis can appear at any age, but it often presents itself from the ages of 10 to 12 years old, or during the teen years. However, children of any age (even infants) can have scoliosis.

What Are the Different Types of Scoliosis?

There are three categories for the different forms of scoliosis: idiopathic (unknown origin), congenital (birth defect), and neuromuscular (secondary to a neurological or muscular condition).

While most people with scoliosis have a mild form of the disorder, scoliosis can sometimes cause serious complications, including:

Scoliosis can be classified by its cause or origin. However, some kinds of scoliosis have no apparent cause (idiopathic scoliosis), though there may be hereditary factors that tend to run in families.

In cases where scoliosis has a clear cause, doctors classify the condition as either structural or nonstructural.

In nonstructural scoliosis, the spine works normally but looks curved. There can be several reasons for this, such as one leg being longer than the other, muscle spasms, and inflammations like appendicitis. With the proper treatment of the underlying problems, this type of scoliosis often goes away.

In structural scoliosis, the curve of the spine is rigid and can’t be reversed. Some of the causes can include:

Congenital scoliosis begins as a baby’s back develops before birth. Problems with the tiny bones in the back (vertebrae) can cause the spine to curve improperly. Doctors may detect this condition when the child is born. Or, they may not find it until the child reaches the teen years.

Some cases of scoliosis may develop as a result of degeneration of the spinal discs (arthritis, osteoporosis).

What Are the Risk Factors for Scoliosis?

Some of the risk factors for developing the most common types of scoliosis include:

It is important to note that an individual cannot cause scoliosis. The condition is not the result of carrying heavy backpacks, active participation in sports, poor posture, or anything else a person might do. Furthermore, the abnormal curves in the back cannot be corrected by “learning to stand up straight.”

What are the Signs and Symptoms of Scoliosis?

Sometimes scoliosis is easy to see (signs). The symptoms of scoliosis, however, can resemble other spinal conditions or may be a result of an injury or infection. A curve in the spine can make the body appear to be leaning to one side. Often, however, scoliosis isn’t evident. That’s why health care providers do a scoliosis exam as part of a regular checkup with children.

Scoliosis typically becomes apparent from infancy with signs such as:

Other signs may indicate the possibility of scoliosis in adolescents and adults. The signs vary but can include:

There are additional symptoms in adults with idiopathic scoliosis, because of disc and joint degeneration leading to a narrowing of the openings for the spine and nerves (spinal stenosis). Some of the symptoms of adults with degenerative scoliosis include:

These symptoms can worsen and lead to a gradual loss of function. Some patients may lean forward to try to relieve pressure on the nerves. Others may lean forward because of the loss of their natural curve in their lumbar spine (low back), causing them to bend their hips and knees in an effort to maintain an upright posture.

If a scoliosis curve gets worse, the spine will also rotate or twist, in addition to curving side to side. This causes the ribs on one side of the body to stick out farther than on the other side.

How is Scoliosis Diagnosed?

To diagnose scoliosis, a pain clinic in Lakeland, Florida, will take a detailed medical history. For a child, the doctor will also want to know about recent growth. Because scoliosis often runs in families, the medical history will include questions about the patient’s family health.

The doctor will also conduct a physical examination of the spine, ribs, hips, and shoulders. The doctor will check to see if one side of the rib cage is more prominent than the other. The doctor may also perform a neurological exam to check for:

Using a tool called an inclinometer (or scoliometer), the doctor can measure the degree of a scoliosis curve. A positive diagnosis is made if the curve is greater than 10 degrees. Scoliosis is generally considered significant if the back has a curve greater than 25 to 30 degrees. Curves exceeding 45 to 50 degrees are considered severe.

Confirmation of a scoliosis diagnosis is usually made with an imaging test to reveal the severity of the spinal curvature. The imaging tests can include:

If the doctor suspects an underlying condition, such as a tumor causing scoliosis, additional tests may be ordered.

How is Scoliosis Treated in Children?

While there are guidelines for mild, moderate, and severe curves, the decision to begin treatment for a child is always made on an individual basis. Some of the factors the doctor will consider regarding treatment include:

In cases of mild scoliosis in a child, the doctor will take a “wait-and-see” approach with checkups every four to six months to monitor any change in the curvature of the spine.

When treatment is used for children, it can include:

Most children with scoliosis have mild curves and probably won’t need treatment with a brace or surgery. In fact, slight curves that are found in 90% of scoliosis cases don’t typically require treatment.

How is Scoliosis Treated in Adults?

For adults with degenerative scoliosis, non-operative treatment is appropriate for most adults who don’t have disabling symptoms. Treatments can include:

In cases of degenerative scoliosis that produces disabling pain in the back or legs, treatment can include:

Surgery can improve spinal balance and relieve spinal nerve pressure, which helps reduce pain. The spinal bones can be fused together to correct the alignment.

For children that require surgery, the primary goal is to stop the curve from progressing during adulthood and to diminish spinal deformity. Surgery is usually recommended only when the spinal curvature is greater than 40 degrees, and there are signs of progression.

The surgery (spinal fusion) straightens the spine as much as possible and holds it in place with rods and screws. Bone grafts then join (fuse) some of the vertebrae together.

In adults, surgery may be recommended when the spinal curve is greater than 50 degrees, and the patient has nerve damage in the legs and/or is experiencing bowel or bladder symptoms. The goal is to restore spinal balance, reduce pain and discomfort by relieving nerve pressure (decompression), and maintain correct alignment by fusing and stabilizing the spinal segments.

The surgical procedures for scoliosis include:

Approximately 90% of people identified with idiopathic scoliosis have curves that never progress enough to require bracing or surgery.

Do Other Treatments Work?

Studies indicate that many alternative treatments for scoliosis are ineffective. Chiropractic treatment, nutritional supplements, and electrical stimulation of the muscles have not been shown to stop changes in spinal curves.

While exercise doesn’t have a direct effect on scoliosis, it’s essential to stay fit and maintain a healthy weight at every age. Activities like running, walking, and soccer can help keep bones strong, which is especially important in coping with scoliosis as the patient ages.

Novus Spine & Pain Center is in Lakeland, Florida, and specializes in treating scoliosis pain. By using a comprehensive approach and cutting-edge therapies, we work together with patients to restore function and regain an active lifestyle, while minimizing the need for opiates.