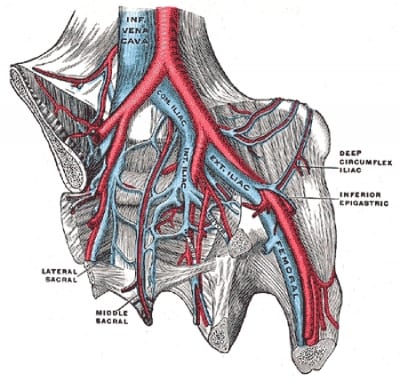 May-Thurner syndrome (MTS) is a type of vein disease that is difficult to diagnose but can have a significant impact on the health of the veins. This condition increases a person’s risk of developing deep vein thrombosis (DVT), a type of blood clot that if left untreated can be potentially life-threatening.

DVT related to May-Thurner syndrome is most common in women between the ages of 20 and 40, especially after pregnancy or following an extended period of inactivity.

It’s hard to know how many people get May-Thurner syndrome, because most cases don’t have any symptoms. However, it is estimated between two and five percent of all individuals suffering from vein disorders in the lower extremities have May-Thurner syndrome.

The Vein Clinic at Novus Spine & Pain Center in Lakeland, Florida specializes in diagnosing and treating May-Thurner syndrome, which is named after the physicians who first described the phenomenon in 1957, R. May and J. Thurner.

What is May-Thurner Syndrome?

To understand May-Thurner syndrome, it is important to understand the anatomy of blood flow in the body. Blood vessels carry blood to every part of the body. Arteries move blood away from the heart, while veins return blood to the heart.

This condition involves the right iliac artery, which carries blood to the right leg, and the left iliac vein, which brings blood out of the left leg on its way back toward the heart. In the pelvis, the right iliac artery naturally crosses the left iliac vein. The close proximity of these blood vessels, in people with May-Thurner syndrome, leads to the artery placing pressure on the vein. The pressure causes the vein to become pinched between the artery and vertebrae in the back. The exact cause of this increased compression is unclear.

The added pressure leaves a narrower opening and prevents blood from flowing as freely through the left iliac vein. The result is similar to stepping on a garden hose; if the pressure is severe enough, it can restrict the blood flow. This condition can lead to blood pooling (statis) and allow blood clots to form. The pressure can also cause scarring in the vein. If clots form, they can create a deep vein thrombosis (DVT) in the left leg, which is a type of blood clot that can be very serious.

Recently, the May-Thurner syndrome definition has been expanded to a broader disease profile known as nonthrombotic iliac vein lesions (NIVL) which can involve both the right and left iliac veins as well as multiple other blood vessels.

May-Thurner syndrome is random. It is an anatomic variant people are born with, but it is not an inherited trait. The condition is thought to be related primarily to a congenital condition, which may cause an aberration in the arrangement of the left iliac vein and the right iliac artery. The condition may also develop as a result of trauma, and the likelihood may increase with age and extreme weight gain.

While May-Thurner syndrome causes a DVT in some people, other people experience no problems and the syndrome goes unnoticed and undiagnosed.

What are the Symptoms of May-Thurner Syndrome?

People with May-Thurner syndrome most likely don’t even know they have it unless they develop a DVT. In fact, many people with May-Thurner syndrome have no symptoms, even if there is a pronounced narrowing of the iliac vein, because smaller veins that bypass the narrowed area enlarge and drain the blood from the leg vein very efficiently. These bypassing veins are called “collaterals.”

Some people with severe vein narrowing experience leg swelling and pain that is often described as chronic venous insufficiency. However, there usually aren’t any warning signs. If pain develops, it is most noticeable when the affected limb hangs down from the edge of a bed or chair. There is also significant swelling of the whole limb.

With a DVT, your left leg may show symptoms such as:

If a piece of a DVT breaks off and travels to the lung, it can cause a pulmonary embolism (PE). A PE can be a life-threatening medical emergency. Seek immediate medical attention should you notice any symptoms of a PE:

How is May-Thurner Syndrome Diagnosed?

May-Thurner syndrome’s lack of symptoms makes it difficult to diagnose. After a physical exam, May-Thurner syndrome can only be definitively diagnosed by imaging the lower back and pelvic area, using techniques which may include:

How is May-Thurner Syndrome Treated?

May-Thurner syndrome only requires treatment if a DVT starts to produce symptoms. To prevent prolonged swelling and pain, blood flow must be improved through the leg. In less serious cases, MTS can be managed with compression stockings. However, the most commonly prescribed treatments for May-Thurner syndrome are to resolve the symptoms and risks associated with the DVT.

The two primary goals of treating a DVT are to treat existing clots and to keep new ones from forming. Most of the options for treating a DVT is the administration of anticoagulants (blood thinners). There are several options available, including:

Some of the surgeries associated with May-Thurner syndrome are done on an outpatient basis, allowing the patient to go home the same day after the procedure. Depending on the procedure, the patient should be able to return to normal activities within a few days to a week. The doctor may also recommend lifestyle changes the patient can make to reduce the risk of developing new clots.

Novus Spine & Pain Center is in Lakeland, Florida, and specializes in diagnosing and treating May-Thurner syndrome. By using a comprehensive approach and cutting-edge therapies, we work together with patients to restore function and regain an active lifestyle, while minimizing the need for opiates.

To schedule an appointment, please contact us online, request a call back, or call our office at 863-583-4445.